Me, Myself, and the "Aftermath Mod"

What a summer its been!  Busy busy busy!  And finally, I'm very close to being able to show you some of what I've been busy with, and why I've been off-the-radar so much lately (and this time, thankfully, it wasn't health related). 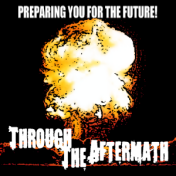 First things first!  Work on the "Through the Aftermath" mod is moving at a breakneck pace, and I'm juuuuuuust about where I can throw a teaser or two to you.  There were a few technical details we had to work out, seeing as there are some pretty screwy things Fallout NV's engine limits as far as modding is concerned.  The TTAM episodes are really huge in size, and I had to find a way to make them play nice. :)

Now some goodies... the Aftermath mod is going to feature some new material, and some new skits. You didn't actually think you were just going to have to listen to straight replays of all the shows, right?  We had to make it something you WANT to hear while running around the wasteland. We had to make it sound like Shawn and I are actually there. There are commercials, some hilarious news clips, and some things I don't dare spoil for you yet.
This extra material is why the mod took quite a bit longer than you likely predicted.  Believe me, it's worth it. :)

And now, my wasteland friends, I need YOUR help as well.  This is your chance to add a piece to the mod and the TTAM Radio station.  I'm looking for some great user-created content for the mod... something to help keep the variety going.  I'm talking skits, retro parody-commercials, or even something you think fits the bill as far as what you'd like hear on a RL "Through the Aftermath" radio station in the wasteland.  This is your chance to be part of the radio station and the mod.  At this point, the only stipulations we have are these:

- Try to keep it clean.  We want everyone to be able to enjoy this.  No tags at religious, racial or political things.  People in Fallout NV are angry enough without us adding more.

- Try to avoid anything that is going to break the immersion of the mod.  Remember, in the mod-world, it's a retro-50's post apocalyptic nuclear wasteland.  Shawn and I are broadcasting from a literal underground bunker.  If your material can be believable under those circumstances, you should be fine.

If you want to contribute, throw me an email at "aftermathjonathan[at]gmail[dot]com" and let me know what you have in mind.  The best part is that in the end, it'll help make this Fallout mod more of what made the TTAM podcast great... the community.  It'll be something we all added a piece to.  And then we can all listen to it while we head-shot Benny from the top of  the Lucky 38.

So stay tuned.  You'll be playing this mod very soon. ;)
Posted by AftermathJonathan at 2:01 PM