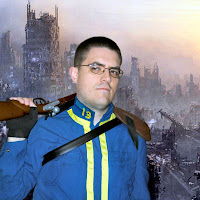 I'm JONATHAN MORRIS, former co-host of the "Through the Aftermath" podcast, and avid-fan of the post-apocalyptic genre of media.  What started out as a normal Saturday back in the 80's watching "Mad Max" with my father, and later picking up the masterpiece game "Wasteland" on the Commodore64, would later turn into a love for all things post-nuclear and cyberpunk.
I later combined this strange obsession with a love for real-life emergency preparedness to cover the fact that telling people things like this in real-life made them think you were insane and not speak to you in public.  Or it could have been when I told them I was the future Resistance leader and robots from the future had tried killing me twice.  Or maybe it was when that kid in third grade puked in the school cafeteria and I yelled superflu and then told our teacher that she should immediately quarantine the school and head for Boulder, Colorado.  Yeah... that last one may have been it.  A crazy year, that was...