Making the Aftermath Mod - Part 1: "The Power of Detail" 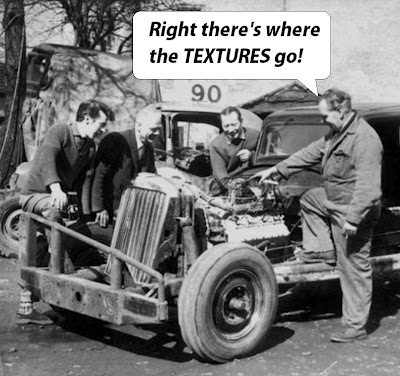 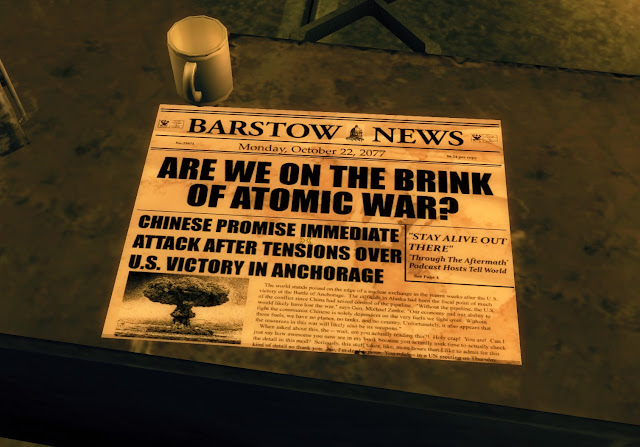 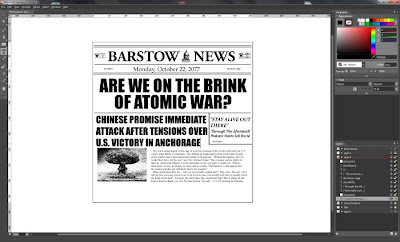 It took a crazy amount of time, but I actually put this together by hand.  I used elements based on real newspapers, and used Microsoft Expression and some stock pictures to create the "Barstow News", their local newspaper.  You can even read the fine print if you look close (click for the big screenshot).  There's even some humorous "Easter Eggs" all over the place in this mod if you look close.  I do so love that stuff. :)
To portray the "Civil Defense" mentality that the people of Barstow all share, I went for the real-world examples.  I'm an avid fan of the cold war-era posters and the media they had back then.  I scoured the Internet for good examples that would fit the setting and set to work remaking them our own Fallout-world.  In some of the posters or papers, I just re-worded or restructured parts and added new pictures...in other instances, I did all of the design from scratch.
Here's a small example.   This is an actual Civil Defense poster from 1959: 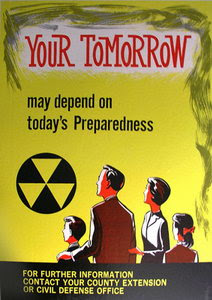 Here's my own "re-done" version of it. 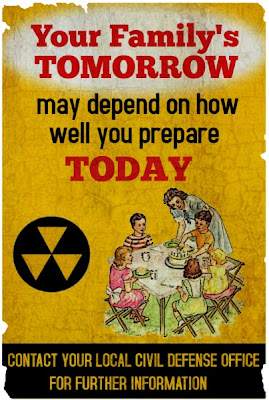 Again using Microsoft Expression (I LOVE that program for this kind of thing), I redid the poster with a new picture and new font-work.  In this case, the poster is very close to the original, but in other cases -- like the one I'm about to show you -- it's all new. 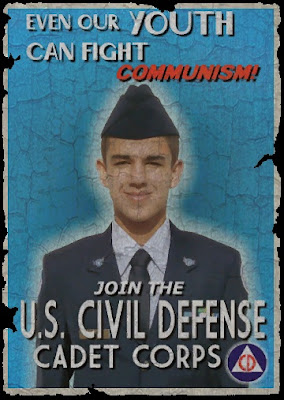 In this particular case, I created a poster for the fictional "Junior Civil Defense Cadet Corps", which -- in my mod's world -- would have been the equivalent of the Civil Air Patrol.  In my mod's backstory, the people of Barstow would definitely be aiming recruitment at the younger generations, so this would be the group that a 15-year-old boy would join to help his local Civil Defense chapter...almost like a Civil Defense-themed "Boy Scouts".  It's even entirely possible that the people in our version of Barstow would possibly have foregone the Boy Scouts altogether in lieu of Civil Defense, since they likely knew how close to nuclear war they were at the time.
Now I just needed someone to be our "poster boy" for the Corps.  Tammy -- a friend of mine at work -- has a son named Tyler who is currently in the Air Force ROTC program at his school.  One day, I noticed one of the pictures she had on her desk was one she'd taken of him standing proudly in his uniform.  He looked like he was right out of a 1950's recruitment poster.  With their permission, I redid the picture and a few hours later had Tyler on a recruitment poster adorning the walls of Barstow's city buildings, proudly telling all of the young people in 2077 Barstow that they could still "Do Their Part!" for their city.  Pretty cool, eh?
While these are just 3 simple examples, you can see that each of them has their own purpose and way of showing Barstow's backstory.  All of them make the world much more tangible and real to the player. I've always believed in that kind of immersion is an extremely important piece of the player's experience and one that many triple-A titles still screw up.  Sure it takes alot of time to add detail like that, but I think the pay-off far exceeds the time it takes.   Even for a one-man team like me.
They say the devil is in the details, but I think they have it backwards.
- Detail succeeded when you first laughed after noticing the "TPS Reports" on the desk in the office-map in "Counterstrike".
- Detail succeeded when you shivered when a face-hugger started running along the ceiling at you in "Aliens vs Predator", when you never saw a game try that before.
- On the flip-side, detail did NOT succeed when someone thought it would be amusing to have your life-meter be a tattoo on the cleavage of your female character in "Jurassic Park: Trespass".
Well...then again, maybe it DID succeed there, depending where you're coming from on that one.
Yeah, crap...maybe that last one wasn't a good example...
So at the end of all this, I hope you've gotten a taste of what this mod has in store.  Not so much to build "hype", but more to give you a bit more insight into the world I've tried to create.  If you're the type of player that blows through a game fairly quickly just to get to the end, you'll still enjoy this mod.  The story is a hoot and you'll still get a kick out of all of it.
But if you're the kind of player who can appreciate the details you see -- the posters on the wall...the newspaper on the table -- then you'll get a much bigger sense of the world that Barstow once was. And maybe you'll see why this project took so long, but that taking that long was definitely a necessary thing.
If not, I think I'm probably going to hurl.
I'm looking forward to showing you even more "Making the Aftermath Mod" features very soon.
Stay tuned, my friends. And Stay Alive Out There!
Posted by AftermathJonathan at 9:29 PM