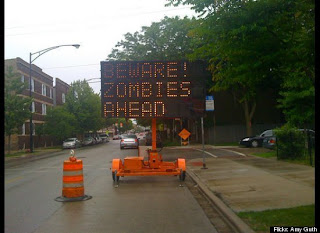 If you haven't heard this already, you're gonna love this one.  According to the Denver Post the other day, some "hacker pranksters" (lol)  evidently broke into the digital road signs along some of the roads in Colorado Springs and reprogrammed them to inform incoming motorists "BEWARE! ZOMBIES AHEAD!".

No, I swear I'm not making this up.

Apparently, there's been an increase of these types of pranks over the last few years all over the United States.  All of them warn of anything from "Zombies" to "Strippers" to "Zombie Strippers"  (no, I'm not kidding).

I gotta tell ya, leave it to the generations of today to think of hilarious (and somewhat insane) ways to prank.  Our parents kidnapped the mascots from their rival college... us?   We warn the interstate of an impending Zombie Apocalypse.  The one who puts "Raiders Attacking Oil Refinery, Next Left" gets 10 points.

By the way, "The Walking Dead" starts season 2 on October 17th.

There. See how I did that? ;)
Posted by AftermathJonathan at 8:39 PM